Fructose in fruits may be good for you, especially if you are low in glycogen

Excessive dietary fructose has been shown to cause an unhealthy elevation in serum triglycerides. This and other related factors are hypothesized to have a causative effect on the onset of the metabolic syndrome. Since fructose is found in fruits (see table below, from Wikipedia; click to enlarge), there has been some concern that eating fruit may cause the metabolic syndrome. 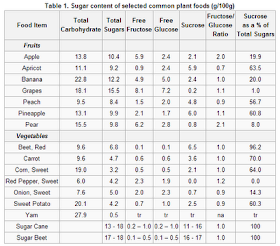 Vegetables also have fructose. Sweet onions, for example, have more free fructose than peaches, on a gram-adjusted basis. Sweet potatoes have more sucrose than grapes (but much less overall sugar), and sucrose is a disaccharide derived from glucose and fructose. Sucrose is broken down to fructose and glucose in the human digestive tract.

Dr. Robert Lustig has given a presentation indicting fructose as the main cause of the metabolic syndrome, obesity, and related diseases. Yet, even he pointed out that the fructose in fruits is pretty harmless. This is backed up by empirical research.

The problem is over-consumption of fructose in sodas, juices, table sugar, and other industrial foods with added sugar. Table sugar is a concentrated form of sucrose. In these foods the fructose content is unnaturally high; and it comes in an easily digestible form, without any fiber or health-promoting micronutrients (vitamins and minerals).

Dr. Lustig’s presentation is available from this post by Alan Aragon. At the time of this writing, there were over 450 comments in response to Aragon’s post. If you read the comments you will notice that they are somewhat argumentative, as if Lustig and Aragon were in deep disagreement with one other. The reality is that they agree on a number of issues, including that the fructose found in fruits is generally healthy.

Fruits are among the very few natural plant foods that have been evolved to be eaten by animals, to facilitate the dispersion of the plants’ seeds. Generally and metaphorically speaking, plants do not “want” animals to eat their leaves, seeds, or roots. But they “want” animals to eat their fruits. They do not “want” one single animal to eat all of their fruits, which would compromise seed dispersion and is probably why fruits are not as addictive as doughnuts.

From an evolutionary standpoint, the idea that fruits can be unhealthy is somewhat counterintuitive. Given that fruits are made to be eaten, and that dead animals do not eat, it is reasonable to expect that fruits must be good for something in animals, at least in one important health-related process. If yes, what is it?

Well, it turns out that fructose, combined with glucose, is a better fuel for glycogen replenishment than glucose alone; in the liver and possibly in muscle, at least according to a study by Parniak and Kalant (1988). A downside of this study is that it was conduced with isolated rat liver tissue; this is a downside in terms of the findings’ generalization to humans, but helped the researchers unveil some interesting effects. The full reference and a link to the full-text version are at the end of this post.

The Parniak and Kalant (1988) study also suggests that glycogen synthesis based on fructose takes precedence over triglyceride formation. Glycogen synthesis occurs when glycogen reserves are depleted. The liver of an adult human stores about 100 g of glycogen, and muscles store about 500 g. An intense 30-minute weight training session may use up about 63 g of glycogen, not much but enough to cause some of the responses associated with glycogen depletion, such as an acute increase in adrenaline and growth hormone secretion.

Liver glycogen is replenished in a few hours. Muscle glycogen takes days. Glycogen synthesis is discussed at some length in this excellent book by Jack H. Wilmore, David L. Costill, and W. Larry Kenney. That discussion generally assumes no blood sugar metabolism impairment (e.g., diabetes), as does this post.

If one’s liver glycogen tank is close to empty, eating a couple of apples will have little to no effect on body fat formation. This will be so even though two apples have close to 30 g of carbohydrates, more than 20 g of which being from sugars. The liver will grab everything for itself, to replenish its 100 g glycogen tank.

In the Parniak and Kalant (1988) study, when glucose and fructose were administered simultaneously, glycogen synthesis based on glucose was increased by more than 200 percent. Glycogen synthesis based on fructose was increased by about 50 percent. In fruits, fructose and glucose come together. Again, this was an in vitro study, with liver cells obtained after glycogen depletion (the rats were fasting).

What leads to glycogen depletion in humans? Exercise does, both aerobic and anaerobic. So does intermittent fasting.

What happens when we consume excessive fructose from sodas, juices, and table sugar? The extra fructose, not used for glycogen replenishment, is converted into fat by the liver. That fat is packaged in the form of triglycerides, which are then quickly secreted by the liver as small VLDL particles. The VLDL particles deliver their content to muscle and body fat tissue, contributing to body fat accumulation. After delivering their cargo, small VLDL particles eventually become small-dense LDL particles; the ones that can potentially cause atherosclerosis.