No fat gain while eating well during the Holiday Season: Palatability isolines, the 14-percent advantage, and nature’s special spice

Like most animals, our Paleolithic ancestors had to regularly undergo short periods of low calorie intake. If they were successful at procuring food, those ancestors alternated between periods of mild famine and feast. As a result, nature allowed them to survive and leave offspring. The periods of feast likely involved higher-than-average consumption of animal foods, with the opposite probably being true in periods of mild famine.

Almost anyone who adopted a low carbohydrate diet for a while will tell you that they find foods previously perceived as bland, such as carrots or walnuts, to taste very sweet – meaning, to taste very good. This is a special case of a more general phenomenon. If a nutrient is important for your body, and your body is deficient in it, those foods that contain the nutrient will taste very good.

This rule of thumb applies primarily to foods that contributed to selection pressures in our evolutionary past. Mostly these were foods available in our Paleolithic evolutionary past, although some populations may have developed divergent partial adaptations to more modern foods due to recent yet acute selection pressure. Because of the complexity of the dietary nutrient absorption process, involving many genes, I suspect that the vast majority of adaptations to modern foods are partial adaptations.

Modern engineered foods are designed to bypass reward mechanisms that match nutrient content with deficiency levels. That is not the case with more natural foods, which tend to taste good only to the extent that the nutrients that they carry are needed by our bodies.

Consequently palatability is not fixed for a particular natural food; it does not depend only on the nutrient content of the food. It also depends on the body’s deficiency with respect to the nutrient that the food contains. Below is what you would get if you were to plot a surface that best fit a set of data points relating palatability of a specific food item, nutrient content of that food, and the level of nutrient deficiency, for a group of people. I generated the data through a simple simulation, with added error to make the simulation more realistic.

Based on this best-fitting surface you could then generate a contour graph, shown below. The curves are “contour lines”, a.k.a. isolines. Each isoline refers to palatability values that are constant for a set of nutrient content and nutrient deficiency combinations. Next to the isolines are the corresponding palatability values, which vary from about 10 to 100. As you can see, palatability generally goes up as one moves toward to right-top corner of the graph, which is the area where nutrient content and nutrient deficiency are both high. 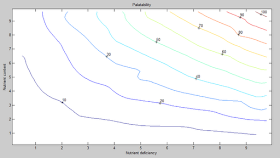 What happens when the body is in short-term nutrient deficiency with respect to a nutrient? One thing that happens is an increase in enzymatic activity, often referred to by the more technical term “phosphorylation”. Enzymes are typically proteins that cause an acute and targeted increase in specific metabolic processes. Many diseases are associated with dysfunctional enzyme activity. Short-term nutrient deficiency causes enzymatic activity associated with absorption and retention of the nutrient to go up significantly. In other words, your body holds on to its reserves of the nutrient, and becomes much more responsive to dietary intake of the nutrient.

The result is predictable, but many people seem to be unaware of it; most are actually surprised by it. If the nutrient in question is a macro-nutrient, it will be allocated in such a way that less of it will go into our calorie stores – namely adipocytes (body fat). This applies even to dietary fat itself, as fat is needed throughout the body for functions other than energy storage. I have heard from many people who, by alternating between short-term fasting and feasting, lost body fat while maintaining the same calorie intake as in a previous period when they were steadily gaining body fat without any fasting. Invariably they were very surprised by what happened.

In a diet of mostly natural foods, with minimal intake of industrialized foods, short-term calorie deficiency is usually associated with short-term deficiency of various nutrients. Short-term calorie deficiency, when followed by significant calorie surplus (i.e., eating little and then a lot), is associated with a phenomenon I blogged about before here – the “14-percent advantage” of eating little and then a lot (, ). Underfeeding and then overfeeding leads to a reduction in the caloric value of the meals during overfeeding; a reduction of about 14 percent of the overfed amount.

So, how can you go through the Holiday Season giving others the impression that you eat as much as you want, and do not gain any body fat (maybe even lose some)? Eat very little, or fast, in those days where there will be a feast (Thanksgiving dinner); and then eat to satisfaction during the feast, staying away from industrialized foods as much as possible. Everything will taste extremely delicious, as nature’s “special spice” is hunger. And you may even lose body fat in the process!

But there is a problem. Our bodies are not designed to associate eating very little, or not at all, with pleasure. Yet another thing that we can blame squarely on evolution! Success takes practice and determination, aided by the expectation of delayed gratification.