The bipolar disorder pendulum: Depression as a compensatory adaptation

As far as explaining natural phenomena, Darwin was one of the best theoretical researchers of all time. Yet, there were a few phenomena that puzzled him for many years. One was the evolution of survival-impairing traits such as the peacock’s train, the large and brightly colored tail appendage observed in males.

Tha male peacock’s train is detrimental to the animal’s survival, and yet it is clearly an evolved trait ().

This type of trait is known as a “costly” trait – a trait that enhances biological fitness (or reproductive success, not to be confused with “gym fitness”), and yet is detrimental to the survival of the individuals who possess it (). Many costly traits have evolved in animals because of sexual selection. That is, they have evolved because they are sexy.

Costly traits seem like a contradiction in terms, but the mechanisms by which they can evolve become clear when evolution is modeled mathematically (, ). There is evidence that mental disorders may have evolved as costs of attractive mental traits (); one in particular, bipolar disorder (a.k.a. manic-depression), fits this hypothesis quite well.

Ironically, a key contributor to the mathematics used to understand costly traits, George R. Price (), might have suffered from severe bipolar disorder. Most of Price’s work in evolutionary biology was done in the 1970s; toward the end of his life, which was untimely ended by Price himself. For many years he was known mostly by evolutionary biologists, but this has changed recently with the publication of Oren Harman’s superb biographical book titled “The Price of Altruism: George Price and the Search for the Origins of Kindness” ().

Bipolar disorder is a condition characterized by disruptive mood swings. These swings are between manic and depressed states, and are analogous to the movement of a pendulum in that they alternate, seemingly gravitating around the "normal" state. See the figurative pendulum representation below, adapted from a drawing on Thinkquest.org. 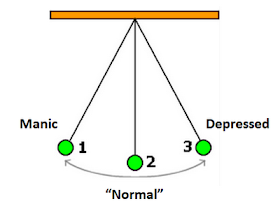 On one hand, a person may become very energetic and creative while in the manic state. This could be one of the reasons why many who suffer from bipolar disorder have fairly successful careers in fields that require creative intelligence (), which are many and not restricted to fields related to the fine and performing arts. Creative intelligence is highly valued in most knowledge-intensive professions ().

On the other hand, sustained acute mania or depression are frequently associated with serious health problems (). This is why the clinical treatment of bipolar disorder often starts with an attempt to keep the pendulum from moving too far in one direction or another. This may require medication, such as clinical doses of the elemental salt lithium, prior to cognitive behavioral therapy. The focus of cognitive behavioral therapy is on changing the way one sees and thinks about the world, particularly one’s “social world”.

Prolonged acute mania, usually accompanied by severely impaired sleep, may lead to psychosis. This, psychosis, is an extreme state characterized by hallucinations and/or delusions, leading to hospitalization in most cases. It has been theorized that depression is an involuntary compensatory adaptation () aimed at moving the pendulum in the other direction, out of the manic state, before more damage ensues ().

Elaborate approaches have been devised to treat and manage bipolar disorder treatment that involve the identification of mania and depression “prodromes” (), which are signs that a full-blown manic or depressive episode is about to start. Once prodromes are identified, cognitive behavioral therapy techniques are employed to prevent the pendulum from moving further in one direction or the other. The main goal of these techniques is to change one’s way of thinking about various issues (e.g., fears, pessimism). These techniques take years of practice to be used effectively.

Identification of prodromes and subsequent use of cognitive behavioral therapy seems to be particularly effective when dutifully applied with respect to manic episodes (). The reason for this may be related to one interesting fact related to bipolar disorder: manic episodes are not normally dreaded as much as depression episodes.

In fact, many sufferers avoid taking medication because they do not want to give up the creative and energetic bursts that come with manic episodes, even though they absolutely do not want the pendulum to go in the other direction. The problem is that, if depression is indeed a compensatory adaptation to mania, it seems reasonable to assume that extreme manic episodes are likely to be followed by extreme episodes of depression. Perhaps the key to avoid prolonged acute depression is to avoid prolonged acute mania.

As someone with bipolar disorder becomes more and more excited with novel and racing thoughts (a prodrome of mania), it would probably make sense to identify and carry out calming activities – to avoid a fall into despairing depression afterwards.